Parents and performers share tips on how to enjoy a performance with your children. 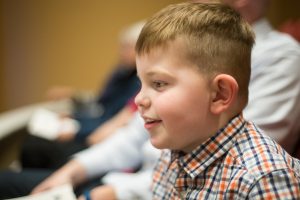 Going out to a show with your kids should be fun, but it’s easy for it to feel daunting. What if the kids are too noisy? Will they even pay attention to the show? And if they enjoy themselves are you going to be bored going to a kids show?

I talked to some people who create entertainment for kids (including parents) and found that sometimes the very same things that seem so challenging can actually help make the event really rewarding!

What happens if your kid is loud?

Naturally, one important preparation step is to make sure kids know what is appropriate behavior at the event. If kids aren’t able to truly understand how to be respectful to performers and fellow audience members for a specific event, then they probably shouldn’t be going to that that event (not yet anyway). But it’s easy to forget that some performances actually thrive on active audiences.

Take for example Mermaid Theater (hat tip to Portland Ovations to bringing them to Maine). When my son and I went to see their performance of Guess How Much I Love you? I was delighted to find that it was a “no shushing performance.”

“We started ‘no shushing’ performances 20 years ago as an experiment” says Jim Morrow, Managing Artistic Director of the Mermaid Theatre of Nova Scotia, “and audiences got it right away. They laughed when they heard the announcement. We’ve found it allows parents and children to interact with each other more freely. It often gets the parents talking with their children about what happens on stage.”

Rather than dictate when audiences should be loud or quiet, Mermaid Theatre is one of many children’s theaters who craft their performances to allow periods of excitement which then ebb into more reflective moments.  It’s also a boon to the performers. The unplanned responses that children make – shouting when they see a favorite character or reciting the well-loved lines of a book – give a vital boost to the energy of the show. Performers often pay close attention to this informal feedback and make post-show notes about the comments kids made, or note if the audience was a bit more quiet or lively.

Also, not every performance needs to take place inside a concert hall. I talked to my friend Sara Kennedy Adams who lives in the “other” Portland on the west coast. She’s the assistant principal to the Spotlight Musical Theatre Academy and parent to a 10 year old and a teen. Nowadays she and her kids go to plenty of different venues. However, when her kids were toddlers, the local coffee shops were their favorite place to catch live music. “I would go with other moms and dads and have a playdate while my kids would wiggle, dance and sing” she said “The kids could get really close to the performers, who interacted with them in a really gentle and fun way.”

What if you just don’t like the idea of going to a “kids show”?

So yes, you and your children probably have different tastes in entertainment and sometimes that needs to be accommodated. However, it can be really worth your time to pick out entertainment that appeals to you too. Several years ago Sesame Street figured out that “co-viewing” (where parents watched and discussed the program with their kids) was key to crafting successful entertainment. So you can trust that most production companies are actually creating kids entertainment with you in mind.

When I talked with John Elliott, Director of Education and Community Engagement at Portland Symphony Orchestra, he reminded me that adults are part of a family. So when PSO crafts a family event, such as their Discovery Concerts, they make sure that the music and the content are designed for adults as well as kids.  If parents and kids are both engaged there is likely to be more enjoyment during the event and more conversation afterwards.

Still, even if you enjoy the entertainment on stage, you may still dread the thought of the seats next to you being packed with rambunctious tots. Fair enough, but make sure you give a few different shows a try before writing it off… many parents have been pleasantly surprised.  Sara Kennedy Adams says “There is nothing else like being in a theater with 1,500 to 3,000 kids, who are all excited when the lights go down. They are so interactive, energetic, and receptive to what’s going on stage.” Sara found that kids can get even more engaged when they are sitting next to  their peers.

So when you are checking out the description of a show to see if it’s right for your kids, think about if there is an element in it that will appeal to you too. And don’t be shy about contacting the venue to get more details. Here are PortTIX we can vouch that box office staff love talking about upcoming shows … these are often our favorite types of calls!

What happens if your kids seem distracted?

Many times kids will go to a show and seem to focus on everything but what is happening on stage. And this could actually be a good thing! John Elliot, at PSO strongly recommends something he calls constructive distraction.

“Often times folks can get hung up on the idea that if they aren’t paying attention to every single second of a performance then they are a bad audience member, or that the arts aren’t for them.” He says, “My feeling is that live performances, especially the great works of art, have a way of sparking memories and emotions inside you that are relevant to only you, and actually encourage your mind to wander to those places. As long as you aren’t bothering people around you, you can interpret the experience however you like and it will still be valuable.”

Another thing to keep in mind that the whole experience of going out to a show is part of the fun – and something that can be overlooked these days when we can get instant entertainment on our phones and iPads. Even needing to take a break during the middle of a performance can be part of the experience. At the PortTIX box office, we sometimes notice parents pop out in the middle of a performance so they can read through the program with their kids, take a little extra time to explore the swooping architecture of Merrill Auditorium…or maybe just chat with other families who also needed to come out for a break!

Thanks to Portland Ovations we have also some children’s books available for loan – don’t be shy about coming the box office to ask to borrow a book.

What if you aren’t fully prepared for an event?

As a parent, I was wary of going to any sporting events with my toddler.  It wasn’t that I dislike sports– my mind just seems focus on anything except the playing field. How was I going to teach him anything if I felt totally lost the minute I entered the stadium? But surprisingly, going to the local Seadogs baseball games turned out be a surprisingly fun family event.

Now, it definitely helped that we had some friends who were baseball fans and had been to Hadlock Field several times before. They could not only explain the various parts of the game to my son (and me) but could give me tips on the best times to go.  (Harry Potter theme night is totally worth it – you get to dress up and march around the baseball field).  That said, even if it had just been the two of us, we probably would have been fine. Tickets were affordable, we enjoyed cheering for the Sea Dogs and we loved wandering around the stadium.  My toddler was interested in the game – but he was just as fascinated by the mascot Slugger the Seadog (who is basically a giant walking stuffy).

So sometimes, even if you don’t feel totally prepared, the risk is worth it.  Sara Kennedy Adams says “I know I have been to shows where I was a little uncertain if my youngest would be interested, but it’s often resulted in wonderful conversations and sometimes even a new interest in a book that is related to the story or music that was performed.”

The bottom line is that there are so many fun things that you and your kid can get out of going out, that even if it isn’t what you expected, odds are you and your kids will find something worthwhile.

P.S. So what do you think? Anything we missed? Email us  and let us know what you’ve done to create a great night out with your kids… or maybe an event that was a little less than perfect?

Some of the events and organizations noted in this blog post include shows that we promote and sell tickets for. Others are simply events that we find interesting and think may be useful for you. Feel free to follow any of the links and judge for yourself. You can check out more of our events below.